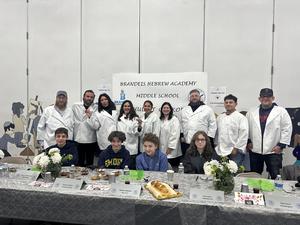 Once again, Middle School students prepared their favorite chulent recipes for the 2023 2nd Annual Cholent Cook off at Brandeis Hebrew Academy. Students in grades five through eight were placed in teams and submitted chulent recipes to prepare. All ingredients and utensils were purchased by the school and Chu’s Meat Market of Lawrence sponsored all of the meat ingredients for each of the eleven recipes. On Thursday, January 12th students sliced and diced the ingredients for their recipes with the support of some of our foodie judges including Chef Naomi Nachman, Chef Kayla Kaye, Gabe Boxer of Kosher Guru and Jonah Chusid of Chu’s Meat Market who stopped by to support the cooking process.

Eleven crockpots cooked on campus overnight and on Friday, January 13th nine celebrity foodie judges joined us to taste and rate each of the recipes.

Our panel of celebrity judges included: